‘This will get us closer to where we need to be’: Welcome to New Era, SportsPro’s dedicated programme for women in sport

After unveiling the inaugural cohort of 12 successful applicants, SportsPro outlines the aim of its New Era programme and speaks to members of the steering group about how the year-round initiative will help drive greater gender equality and representation within the global sports industry.

There are still a couple of months left in 2022, but for women’s sport, this year has already delivered on what it promised.

Major events such as the Uefa Women’s European Championship in England, the inaugural Tour de France Femmes and the ongoing Rugby World Cup in New Zealand have been surpassing even the greatest of expectations, generating new records in attendances and viewership that have only served to reinforce the belief that women’s sport remains the next big growth opportunity for the sports industry.

The legacy left by those events will be crucial to ensuring that their positive impact continues to be felt across domestic leagues and competitions, which themselves are now slowly starting to benefit from greater broadcast exposure and sponsorship investment.

That all bodes well for the future of women’s sport more broadly, but what about women in sport?

Even some of those marquee gatherings mentioned above are still largely overseen by male leadership teams, a relic of the fact that the B2B sports industry has historically been a tightly knit, closed-shop business predominantly run by men. And for all the talk of progress and records on the field, there are still women working within the sporting world who have stories to tell of being overlooked for promotions, misunderstood around sensitive issues, and downright discriminated against because of their gender.

We know this because we asked them.

That is one of many reasons that SportsPro is launching New Era, a year-round programme that will recognise, support and advocate for the next generation of female leaders in the sports industry, with the overall intention of helping to drive greater gender equality and representation in the sector. 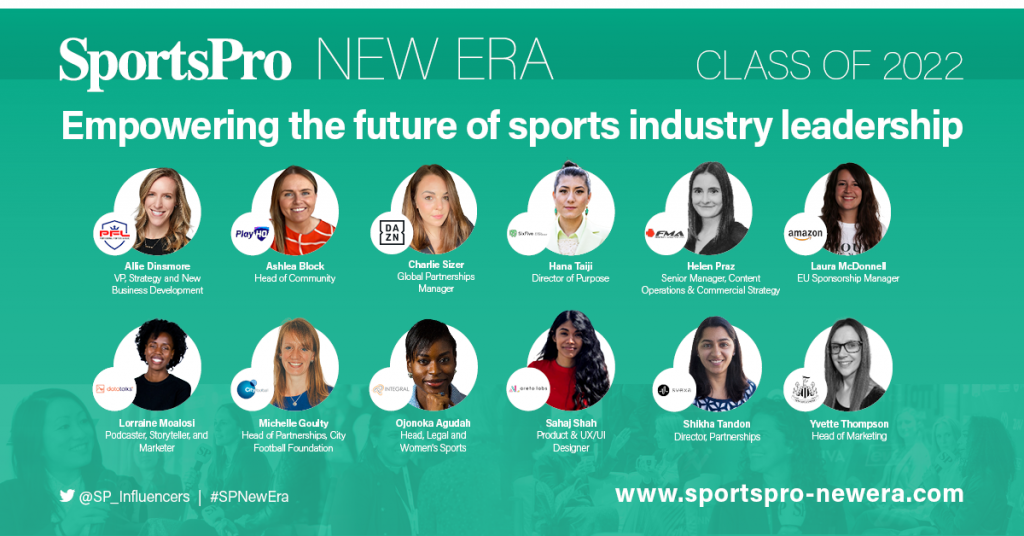 The inaugural NEW ERA Class of 2022

This year saw more than 270 industry professionals from countries across the world register to be among the inaugural New Era cohort. Candidates occupied a variety of roles at a wide array of rights holders, international federations, clubs, brands, agencies and service providers. The successful applicants were determined based on various factors, including notable accomplishments in their career to date, examples of leadership both in and outside of their professional environment, the scale of influence they have in their current position, and the suitability of the programme to create a tangible benefit for the individual based on their profile.

The end result is a group of 12 women at different stages in their careers who have already made an impact both within their own organisations and further afield. The aim of New Era is to now help them take the next step in their journey in sports by using SportsPro’s global platform to provide them with year-round editorial, event and networking opportunities.

Among other benefits, the members of the programme will have the opportunity to lean on the advice and mentorship of an esteemed steering group, who have offered up their time to share their experiences of how they have been able to earn leadership roles within the sports industry.

“One of the things I’ve been reflecting on is how much I probably adapted and changed my style to meet the environment that I was working in,” begins Sarah Beattie, chief marketing officer at Six Nations Rugby and a member of the steering group, “and how that probably came quite naturally to me and something I found quite comfortable doing. But for others, I think [it] would be a real challenge.

“I think it’s only really when you actually get into a slightly more senior position and people start asking you questions around how did you cope with this or how do you do that? You reflect on the fact that, actually, it wasn’t as easy as it could have been. And certainly wasn’t as open and welcoming in certain situations as I would like it to be moving forward.

“I was very lucky early on in my career to have a couple of mentors that didn’t really realise were mentoring me at the time, but that opened the door. It’s part of the reason I want to do this, because I certainly benefit from that and I think anything we can do to create a more welcoming environment and a more inclusive environment the better.”

Joining Beattie in the steering group is a collective of senior executives from diverse backgrounds and organisations, including Fifa, Activision Blizzard and the Olympic Channel, as well as ATP Media, World Table Tennis and SailGP.

"I think anything we can do to create a more welcoming environment and a more inclusive environment the better."

Also part of the steering group is Raven Jemison, the executive vice president of business operations at the Milwaukee Bucks, who originally set out to be an optometrist before entering the world of sport. Prior to starting her current position at the National Basketball Association (NBA) franchise, Jemison also held roles at the NBA league office, the Florida Panthers, Pittsburgh Pirates and San Francisco 49ers.

Speaking now, Jemison says women shouldn’t be afraid to lean on the support of others as they make their way in the industry.

“Sometimes it’s unnatural and you feel like, ‘I want to do this on my own,’” she says. “But the truth is, nobody does it alone. And the quicker you realise the politics and the gamesmanship that comes with being in this industry, the less it will feel like you’re by yourself – and you’re going to be by yourself.

“So yes, there have been challenges, but programmes like this are just opening the doors wide open, so we can figure out how to create more advocates in the rooms to speak up for women who want to be in this industry and make it such that it’s an industry where women want to be.” 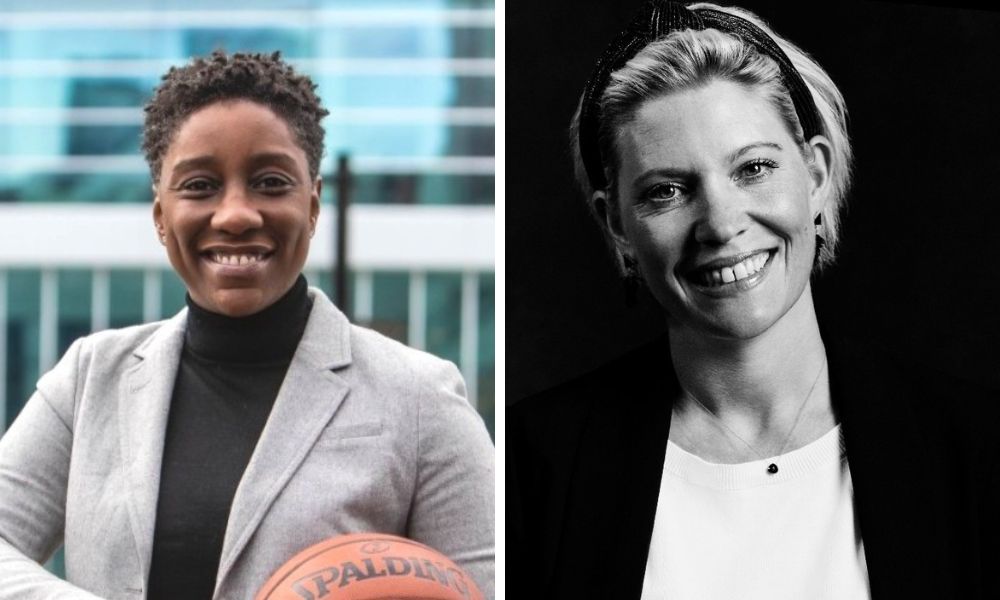 Jemison and her peers in the steering group will be spending dedicated individual coaching time with the New Era cohort, which will also benefit from ongoing community support. In addition, members of the programme will be invited to contribute to SportsPro’s editorial platforms, including through thought leadership articles and podcast guest appearances. They will also be offered on-stage speaking opportunities and year-round access to SportsPro’s portfolio events, something that Beattie sees as being particularly valuable.

“I’ve always found [the events side of things] can be quite challenging for younger people to break into, because it does tend to be the place where a lot of deals get done,” she says. “I stand up on stage and talk about the work that our organisation is doing, but it’s the people within my team that are largely doing that. I want to create the right opportunity for them and for people at that level to come and own the work that they’re doing and be proud of it and talk about it, rather than the most senior person in the room saying ‘this is what we do’.

“So I think opening that up and creating more opportunities for people to feel like they are empowered to do that, have the confidence to do that, and learn the skills to network and stand on a stage and represent your organisation is a really positive thing to do as soon as possible in your career.”

Both Jemison and Beattie agree that they would have leapt at the opportunity to be part of an initiative like New Era had it been available to them earlier in their careers. But they also acknowledge that the programme will bring benefits for the steering group, who themselves will be able to share learnings while gaining access to the next generation of talent.

"The truth is, nobody does it alone. And the quicker you realise the politics and the gamesmanship that comes with being in this industry, the less it will feel like you’re by yourself."

“I think there’s a couple of things I’m looking forward to,” begins Jemison. “Connecting with like-minded women who are at my level, but also tapping into that next level of talent that sometimes isn’t seen because they might not have the access to get into the rooms that we hire from.

“So selfishly, I think it’s going to help both the folks in the steering group as well as the women in the programme.”

New Era will strive to help make the sports industry a more diverse, welcoming environment, something which has been proven to deliver greater diversity of thought and ideas, as well as better business productivity. Strides have already been made but it is also true that the sports industry must do better.

By way of example, The Institute for Diversity and Ethics in Sport’s (TIDES) most recent Racial and Gender Report Card study offered a snapshot of just how far the industry remains from equitable and inclusive hiring practices for women in leadership positions. The Women’s National Basketball Association (WNBA) and NBA were the only North American leagues to receive a B or higher for their gender hiring practices, earning an A+ and B respectively. The National Football League (NFL) was given a C+, with Major League Baseball (MLB) and Major League Soccer (MLS) each receiving a C.

That is just a snapshot of how far we still have to go. Change is undoubtedly happening, but New Era is here to help accelerate progress.

“There are improvements,” notes Jemison, “and you have it on both sides. Both women athletes and women in sports businesses are now converging to say: ‘Listen to us, we add value, here’s how we can add value. Thus, you need to employ us, pay us what we’re worth and all those things.’

“And the more that we can have allies alongside us, the better.”